Work-related stress can cause a wide variety of physical and emotional problems. A new survey finds doctors increasingly worried about the link between workplace stress and migraines. 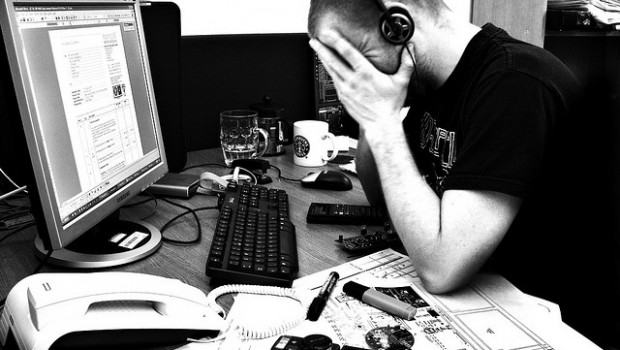 Image courtesy of PhilandPam on Flikr

Stress at work is being blamed for a rise in the number of people suffering from migraines.

GPs say they are concerned by the increase in sufferers and believe that many who eventually seek medical help for the condition are waiting too long before visiting them.

A survey of 100 GPs, conducted by Imigran Recovery, a migraine treatment, found that 37 per cent expressed concern over the rise in the number of patients suffering from migraines. Nine of out ten attributed the increase to workplace stress.

GP Dr Sarah Jarvis said: “Where there’s a migraine attack there’s normally stress involved for a lot of my patients. There are a number of reasons stress may have increased over the years, such as the economic downturn. As a result, migraines may be increasing.”

A separate report by The Migraine Trust, showed that three in five sufferers have received no help or support from their place of work, while three in ten have faced disciplinary action because of the frequency of their headaches.

More than one fifth of workers also claimed they were forced to leave their job because they suffered from too many migraines.

Six million people in the UK suffer from migraines and the condition is estimated to cost the economy £750 million a year.

Hannah Verghese, The Migraine Trust’s advocacy and policy manager, said: “Many employers are failing to recognise the severity of the condition or make appropriate adjustments for employees with migraine.

“Sufferers are too often put at a disadvantage in the workplace.  They are penalised by harsh sickness absence policies and unaware of their rights, many try to cover up their condition and do not ask for support for fear of being stigmatised.

“Employers need to be aware of the disabling impact of the condition and provide support and fair treatment for migraine sufferers at work.”

The secret to a stress-free life