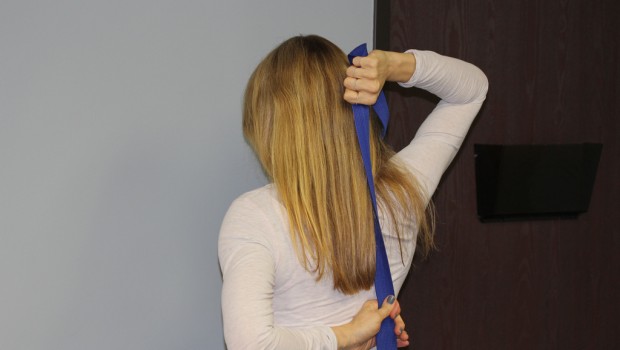 When someone is very stressed, I can usually tell within the first 30 seconds after they sit down in front of me. It is never some one bursting into tears… that gives the game away, although that happens so often that a box of tissues is one of the most important items on my desk. Rather, it is body language and what is not said that provide the clues.

People suffering from stress can be thought of as tightly coiled springs, and the only thing stopping them from going into orbit is usually a constant battle to prevent it. In other words, they know they are very stressed but are so locked into the stress cycle that they cannot get out even if they want to.

They sit with hunched shoulders, and knitted eyebrows, and seem to lose inches from their full height when they walk about. When you ask about specific symptoms, the common ones quoted are headaches, muscle aches and neck and back pain – all muscular in origin.

A great many will also have a typical sitting or standing pattern at work or home – the sales rep who drives 1,000 miles a week, the VDU operator who has not quite got their computer position comfortable for them, or the mother who has her baby balanced on one hip for most of the day. When we have a pain in one part of our body, we often compensate by trying to get into a pain-free position, which may be more uncomfortable than the first, and so on.

The trick here is to have a few simple exercises you can do in the car, in the office or even when you are standing doing the cooking, which will release these tensions and prevent them from building up. As a result, muscle aches and headaches are lessened and you will generally feel better.

The exercises take about five minutes, and you can do them as often as you want during the day, whenever you want. I do them at the end of a busy surgery or during long periods when I am on call. I invariably feel refreshed as a result. Think ‘head, neck, shoulders, arms’ and you have it.

1. Bend your head forward so that your chin is resting on your chest. Massage your temples slowly with your fingers in a clockwise direction for 10 deep circles. Repeat going anti clockwise.

2. Bring your head up and press one ear against your shoulder, keeping your shoulder still. Repeat on the other side.

3. Rotate your right shoulder 6 times in a large circle, forwards and backwards. Repeat on the other side. Finish by reaching upwards with each arm as high and as straight as you can. All the time, concentrate on what you are doing. Breathe slowly and deeply with each movement.

When I suggested these exercises to a very successful businessman who was complaining of chronic stress-related headaches he looked at me as if I had just crawled out from under a rock, but I bet him a bottle of claret that if he stuck with them for two weeks he would feel better.

A little more than a fortnight later his headaches had disappeared and there was one less bottle of wine in his cellar. We were both pleased with the results.

Recharge every two or three hours by taking five minutes to massage your temples, breathe deeply with your eyes closed and open your jaw as wide as you can five times. Add a positive mental picture for even greater effect.

How can stress affect you?