You are here: Stressbusting > Causes > Technology > Multimedia multi-tasking is linked to anxiety: study

Research shows that surfing the internet on your phone while you watch TV could be putting you at risk of mental health problems. 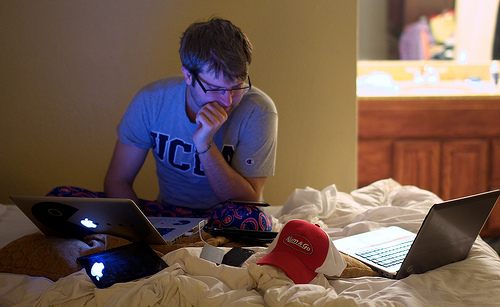 Media multi-tasking, such as texting, watching TV and using a laptop simultaneously, has been linked to anxiety and depression.

In the first study of its kind, US psychologists have linked the use of multiple media platforms to mental health problems – but admit they are not clear how the factors are associated.

“We don’t know whether the media multi-tasking is causing symptoms of depression and social anxiety, or if it’s that people who are depressed and anxious are turning to media multi-tasking as a form of distraction from their problems,” explained Mark Becker, assistant professor of psychology at Michigan State University.

His study, which is published in the journal Cyberpsychology, Behaviour and Social Networking, questioned 319 college students about their mental health and their use of media.

They were asked how many hours per week they used two or more of primary forms of media, such as TV, music, mobile phones, text messaging, computer and video games, and surfing the web.

Using well-established measures for evaluating mental health, the researchers analysed the findings and discovered that those who used several media devices at the same time were almost twice as likely to report symptoms of depression as those who did not multi-task often.

“The unique association between media multi-tasking and these measures of psychosocial dysfunction”, write Becker and colleagues, “suggests that the growing trend of multi-tasking with media may represent a unique risk factor for mental health problems related to mood and anxiety.”

They called for more research to explore the cause and effect of the association, adding that if multi-tasking was found to be the cause of anxiety, recommendations could be made to ease the problem.

If, however, young people with anxiety are multi-tasking to help them deal with their mental health issues, it could signpost that a teenager has depression or anxiety.

One thought on “Multimedia multi-tasking is linked to anxiety: study”