Practising meditation twice a day could help to cut the risk of heart attack or stroke by almost half, according to a new study. 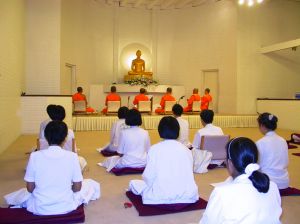 A US study claims that the stress-relieving technique of transcendental meditation – which was first brought to the West in the 1950s by Maharishi Mahesh Yogi and then famously practised by The Beatles – has significant health benefits for those who meditate for 20 minutes, twice daily.

The research, conducted by the Institute for Natural Medicine and Prevention, Iowa, found that transcendental meditation (TM) helped to lower the blood pressure of users, while also helping them feel less stressed.

The claim comes after Dr Robert Schneider and colleagues carried out a randomised, controlled study among 201 African Americans, all of whom had heart disease.

The participants, who were on average 59 years old and had a BMI of 32 (classing them as obese), were randomly split into two groups.

One set of participants received nine hours’ instruction on how to meditate and were asked to practise TM twice a day for 20 minutes. The second took part in a health education programme, and in addition to learning how to manage their health, were also asked to spend 20 minutes a day exercising, relaxing or preparing healthy meals.

Both groups were followed over an average of five years, during which period 52 people either died or had a heart attack or a stroke – 20 from the group that practised TM and 32 from the health education group.

Dr Schneider and colleagues found that those in the TM group were 48 per cent less likely to have a heart attack, stroke or die from all causes compared with those who attended the health education class.

Although participants in both groups changed their health behaviour by increasing exercise and reducing alcohol consumption, TM practitioners were more likely to cut down on smoking.

“It appears that transcendental meditation is a technique that turns on the body’s own pharmacy – to repair and maintain itself,” said Dr Schneider. “[It] may reduce heart disease risks for both healthy people and those with diagnosed heart conditions.”

The study is published in the November 2012 journal, “Circulation: Cardiovascular Quality and Outcomes”.