Virtual Reality Therapy (VRT) is showing promise as a treatment for a variety of mental health problems. Research carried out at the University of Quebec supports the idea that VRT could prove an effective treatment for stress, anxiety and phobias. 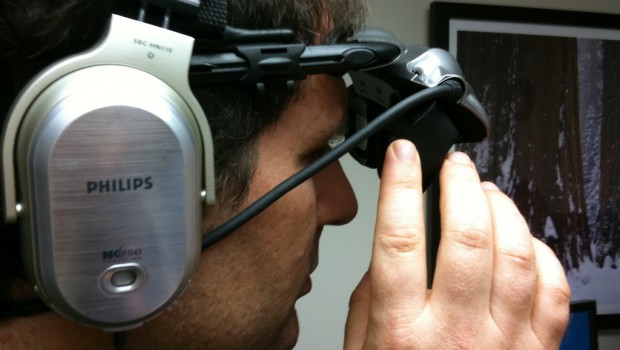 Virtual Reality therapy is becoming an increasingly popular treatment for a variety of stress-related illnesses and phobias.

Based on cognitive behavioural therapy (CBT), VR – part of the growing cyber-psychology discipline – has long been used to help military personnel in both Canada and the US to cope with post-traumatic stress (PTSD) in particular.

Virtual Reality Therapy (VRT), which also goes by names including Virtual Reality Immersion Therapy (VRIT) and Computerized CBT (CCBT), is a form of psychotherapy that harnesses virtual reality technology to help those suffering from stress, anxiety and phobias.

Dr Stéphane Bouchard, from the University of Quebec, oversees the Cave Automatic Virtual Environment (CAVE), just one of six simulators in the world, but the only one that is used for researching the treatment of mental health problems

Research carried out earlier this year by Dr Bouchard suggested that using VR was the ideal medium for treating people with phobias as it helped them to avoid the high levels of anxiety that most suffer when they first encounter their fear. It meant they could tackle their problem slowly and more assuredly.

For this reason, his colleague Geneviève Robillard, a cyber-pyschology research co-ordinator, predicts that VR will take over from CBT, which has patients face up to their fears head-on, to treat many people who suffer from anxiety-related disorders.

A clinic in the Canadian town of Gatineau, Quebec, already treats phobias through VR and is looking to extend its “therapy menu” to care for people with more challenging mental health problems, such as eating disorders.

The US military has used video games to help prevent and treat post-traumatic stress disorder (PTSD), while in Canada a VR pilot project has been helping soldiers back from Afghanistan. The Defence Force in New Zealand has also used video games as part of their stress relief therapy after deployment.

Research carried out by the Institute for Creative Technologies found that 80 per cent of people who underwent video game therapy showed “clinically meaningful” reductions of post-traumatic stress and anxiety.